The Great Egret Ardea alba is a wide ranging, cosmopolitan wading bird that is a generalist, adaptable and relatively tolerant of disturbance. Prior to 1990 there was no development of a nesting colony on Rose island; however, in 1990 a few pairs of Black Crowned Night Heron Nycticorax nycticorax and Glossy Ibis Plegadis falcinellus established nests on the island (Ferren and Myers 1998). In 1991, Great Egrets and Snow Egrets first appeared. The number of nests steadily increased through the 1990s and early 2000s but gradually began to decrease in 2000. All egret and heron nesting had ceased by 2010 (RIDEM 2017, figure 1).

Rose Island is an 18-acre island located in Newport Harbor in lower Narragansett Bay, Rhode Island. The island has had active human occupation since the mid-17th century when it was used by the British, French and colonial armies for early fortifications and eventually the US Army to develop one of the nations First Fortifications known as Fort Hamilton in 1798 (Youngken and Johnson 1994). The island is also home to an active lighthouse build in 1869 on the southwest bastion of Fort Hamilton to warn ships entering Narragansett Bay that has been restored and is a functional navigational aid today. The small parcel with the lighthouse (1.5 acres) is owned by the City of Newport and the remaining 16.5 acres comprising the entire north and east portions of the island are a wildlife refuge owned by the Rose Island Lighthouse Foundation (RILF).

The habitat on Rose Island can be best described as a “sea of invasive plants”. After the civil war (1880), Rose Island was designated as part of the Navy’s experimental torpedo station and designated a naval magazine for storage of explosives – mainly gun cotton, nitro cellulose and others, in the “bomb proof” barracks of Fort Hamilton and elsewhere in buildings on the island. During WWI and WWII ship and submarine torpedo warfare became important to the nation and Rose Island became entirely consumed with building and storage of torpedoes and explosives for the navy. The entire island was cleared of native vegetation and consisted largely of grass and a few scattered trees, introduced oaks

and as many as 40 buildings that stored torpedoes, explosives and equipment. After WWII, these facilities were abandoned, except for the lighthouse operated by the Coast Guard and the completely abandoned in 1970 when the lighthouse was closed. During the next 20 years, various species of trees and shrubs volunteered on the island with oriental bittersweet, honeysuckle, multiflora rose and autumn olive comprising a large portion of this habitat. A few native shrubs (sumac), trees (black cherry) and grasses (switchgrass) and a variety of herbaceous plants (goldenrod and tansy) struggle for existence within this complex habitat. Figure 2 illustrates the condition of Rose Island at the conclusion of WWII. Figures 3 shows current conditions of habitat on Rose Island. 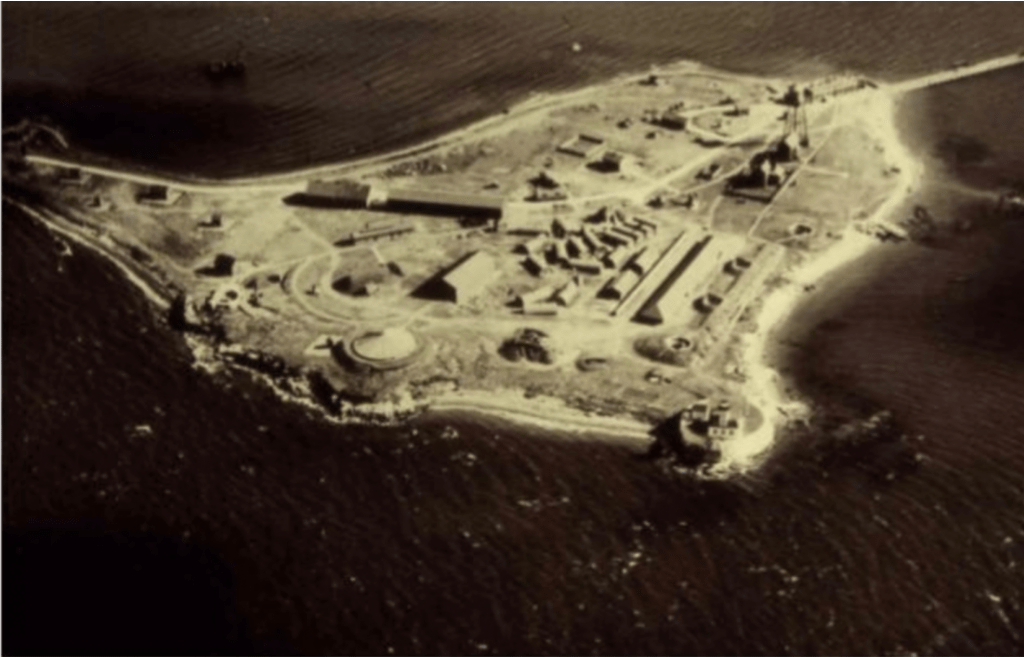 The determination of what first attracted colony nesting birds to Rose Island and subsequently caused them to abandon the colony remains a mystery. The RILF has taken significant steps to exclude any human disturbance of the colony nesters during a lengthy nesting season running from March 1 through August 15. The areas where birds have nested, virtually the entire northern portion of the island, have been isolated and left alone during this period so that no human presence is allowed and is strictly enforced. This results in a minimum 100 m buffer between the lighthouse museum/Fort Hamilton and the nearest portions of the former colony. Evidence from prior nest monitoring activities by RIDEM (2017) show that the establishment and prosperity of colony nesting birds increased throughout the 1990s at a time with the lighthouse reopened to the public as a museum; but started to decrease after many years of increase at a time when human activity was strictly regulated by restrictions to any human disturbance on the island refuge. As a condition of CRMC permitting

activities, RILF agreed to establish a program to enhance, monitor and report on colony nesting bird activities on the island (CRMC 2015, 2018). This project addresses this requirement.

During the period post abandonment by the military (1970’s) rapid establishment, growth and dominance of invasive shrubs and vines increased over the abandoned portions of Rose Island. Eventually (1990), the island became attractive to colony bird nesting. As time progressed, small trees and shrubs that once functioned as nest sites for egrets/herons were soon engulfed by 2-inch diameter bittersweet vines that entangled the canopy. In addition, small shrubs patches (4 to 5 m height) that once provided suitable potential nesting platforms were lost in dense vines. The structure of the habitat which attracted birds over the past 30 years has thus changed significantly. Declines in numbers of nesting great egrets in Florida and the central and upper Mississippi Valleys has been linked to habitat degradation (McCrimmon et.al 2011). Major structural changes in vegetation are potentially going to affect nesting habitat quality for great egrets and herons, such as the clogging of tree and shrub canopy with invasive vines. Great egrets prefer to nest near the tops of trees (range of heights 4-27 m) and microhabitat characteristics were found to be 88% open above nests and average vegetation openness 55% around nests (McCrimmon 1978). Black crowned night herons were found to nest lower in the canopy with average heights in New England colonies ranging from approximately 3m to 7m (Hothem et.al 2010). This raises the possibility that vine entanglement clogging of the tree/shrub canopy on Rose Island with non-native invasive vines could be degrading the nest habitat and structure for great egrets, night herons, Ibis, and other colony nesting birds.

Colony Nesting Birds: During the period March 1 through August 15, no persons are permitted within the wildlife refuge and historical egret nesting area (16.5 acres) which is generally north of the 1.5-acre parcel surrounding the lighthouse and barracks of Fort Hamilton at the south end of Rose Island. This policy is strictly enforced by lighthouse staff. In addition, signs are posted at the shoreline and interior of the island warning all potential visitors of the seasonal limitation. Any physical work accomplished for this project is intended to be completed outside of the nesting season, March 1 through August 15.

We propose to implement a program in spring designed to attract nesting egrets to the existing habitats using white egret decoys in the area where nesting is known to have historically occurred. Historical colony bird nest areas are outlined in general on Figure 4 as a broad area from the center of the island extending southeast toward the eastern peninsula of the island. Each spring during the last 2 years a few Great Egrets and herons fly into this area of Rose Island to roost in the evening; however, none have remained to establish nests. We will attempt to encourage these birds to nest and attract larger numbers for nesting by using egret decoys.

We propose to deploy 12+/- white egret decoys, in pseudo nesting position, within the tops of potential nest trees and shrubs in an effort to attract egrets for nesting. Decoys will be placed into position prior to March 15 and prior to the birds estimated arrival date (after April 1). To aid in monitoring, trail cameras will be positioned in areas to capture any birds attracted to the decoys and potential nesting areas. Using photos, we will record the date, time, species and attempt to determine behavior of the birds landing in the area. If feasible, we will also use artificial recorded calls of egrets and herons to further enhance and attract birds for nesting. In addition, we will conduct physical observations and record any wading birds using these habitats from a remote viewing location (waters east of the island or from a blind established on the eastern shore). Observations will be made two to three times weekly during April and May then once weekly in June, July and August.

Habitat Enhancement and Invasive Plant Management: As noted Rose Island vegetation is largely composed of non-native shrubs and vines that are clogging the habitat and shrubs available for colony nesting birds nesting on the island. The dominant species that impact bird habitats are oriental bittersweet (Celastris orbiculata), vine honeysuckle (Lonicera), and multiflora rose (Rosa multiflora). These three species change the majority of the nesting habitat into a thick tangle that can only be described as impenetrable. We propose to enhance habitats for colony nesting birds on Rose island by removing (mechanical mowing) and enhancement with proposed planting a native trees and shrubs.

Two areas of mechanical mowing treatment are proposed in Figure 4. Zone 1 is located in the southeast central portion of the island within the historical colony nesting bird habitat. Zone 2 is the area located in the islands center extending north to the tip of Rose island. Mechanical treatment (brush mowing) was accomplished during fall 2019 and spring 2020 (prior to March 1). We propose to selectively remove non-native shrubs and vines using smaller portable mowing equipment (bobcat style) as a primary approach to this treatment. Using the equipment, we will sever stems and mulch the invasive plant biomass with stem grinding tools to clear debris, scarify and expose the soil surface layer (</= 6 inches). Hand labor will also be employed to where necessary remove vines from the preserved tree and shrub canopy layer. The approach will be to free tree and shrub canopy of vines and create available nesting sites so that they become opened, available and more attractive to egret and heron nesting. We will mow large openings in invasive shrubs to expose the soil and new planting areas which will receive new plantings of native cherry, sumac and cedar. We will save smaller patches of existing shrubs as potential nesting sites for colony nesting birds. We will preserve all existing trees >4-inch dbh, primarily oaks (Quercus) and black cherry (Prunus serotina), and all native shrubs <2m height, primarily sumac (Rhus sp.and Viburnum sp.). We are also proposing to plant native trees and shrubs in an effort to replace species that are beneficial to nesting birds. Supplemental plantings will be planted in the newly created habitat openings, including red cedar Juniperous virginiana, sumac Rhus sp., and black cherry Prunus serotina. Groupings of cherry, sumac and cedar will be planted throughout the new openings to create a native dominated savanna like habitat. All of the species selected are native and are currently present on Rose island, surviving well in the coastal zone environment.

Herbicide treatments will be employed to curtail regeneration of unwanted non-native plants. We will employ cut stem paint with application of glyphosphate or other appropriate herbicide to control regrowth of invasive plants. No broad-based spraying of herbicides will occur; however, low volume low pressure back pack sprayers will be employed in fall to spot treat and kill any individual invasive shrubs or vines still present in the restored habitats. Annual monitoring, mowing and spot treatments of herbicide will be required long term in future years to control and prevent establishment of unwanted invasive vegetation. Lastly, we propose annual fall mowing of the openings created in this project to maintain habitat structure and prevent any reestablishment of invasive trees, shrubs and vines. In total, approximately 7 +/- acres of the habitat will be managed in this way on Rose Island.

Deployment of wading bird decoys, playback vocalizations, and monitoring bird activity will occur during spring and summer. We are developing an invasive plant species management plan for Rose Island, as described herein, in cooperation with USDA NRCS (2019). Implementation of the invasive plant management project will occur during the period fall 2019 and winter 2020, subject to funding and permits being obtained from NRCS, CRMC and RIHPC. All work proposed will occur outside of the designated nesting season for colony nesting birds, March 1 through August 15.

Cost estimates for this project are currently in development subject to available funding from USDA NRCS in the EQIP program.

Get Involved or Donate Today!